Essential Question
How can you use the relationships between side lengths and angle measures in a triangle to solve problems?

Explore Activity
Exploring the Relationship Between Sides and Angles in a Triangle
There is a special relationship between the lengths of sides and the measures of angles in a triangle.
A. Use geometry software to make triangle ABC. Make ∠A the smallest angle. 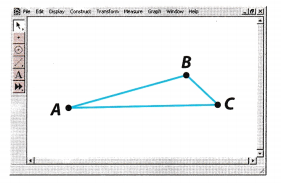 B. Choose one vertex and drag it s0 that you lengthen the side of the triangle opposite angle A. Describe what happens to ∠A. 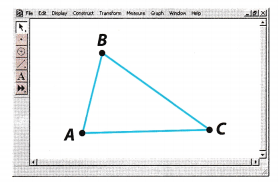 C. Drag the vertex to shorten the side opposite ∠B. What happens to ∠B? 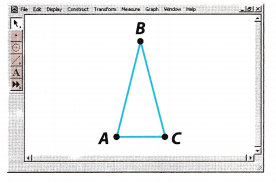 D. Make several new triangles. In each case, note the locations of the longest and shortest sides in relation to the largest and smallest angles. Describe your results. 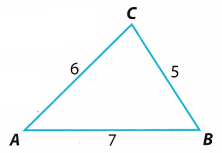 Answer:
Determine the angle measures of the triangle.
m∠A = 45 opposite the shortest side
m∠B = 58 opposite the midsize side
m∠C = 77 opposite the longest side

The side length opposite to the right angle measures 20 feet.

Question 4.
Ramone is building a fence around a vegetable garden in his backyard. The fence will be in the shape of a right isosceles triangle. Two of the side measures are 12 feet and 16 feet. Use a problem solving model to find the total length of fencing he needs. Explain. (Example 2)
Answer:
Right isosceles triangle have two sides and two angles equal. The angle measures are 90° – 45° = 45°. If the opposite side of the largest angle measures 16 ft then the remaining two sides will measure 12 ft each. Add all the
side lengths to determine the total length of fencing he needs or the perimeter
P = 12 + 12 + 16 = 40 feet

The total length of fencing needed for the vegetable garden is 40 feet. 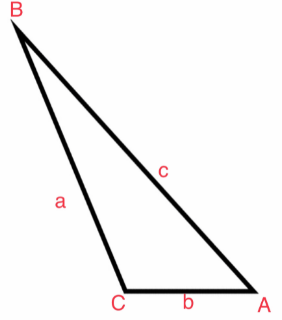 The longest side is the side opposite the largest angle which is side FG.

The figure shows the angle measurements formed by two fenced-in animal pens that share a side. Use the figure for 9-10. 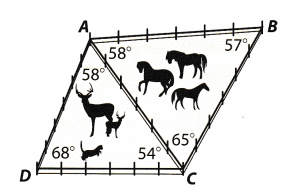 Question 9.
Caitlin says that \(\overline{A C}\) is the longest segment of fencing because it is opposite 68°, the largest angle measure in the figure. Is her reasoning valid? Explain.
Answer:
Her answer is invalid because her longest side of the triangle is only based on ∆ADC alone and not as a whole figure. By looking at the figure, it shows that there can still be other basis for the longest segment

Based on the concept of opposite angles, the longest segment of the indicated triangle is segment AB.

a. Draw a sketch of triangle ABC.
Answer:
Sketch of the triangle. 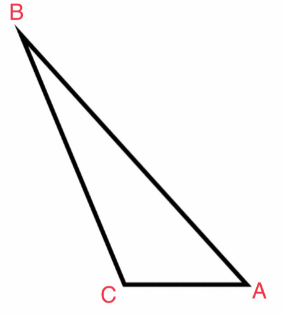 Question 13.
Persevere in Problem Solving Determine the shortest line segment in the figure. Explain how you found the answer.

Segment ZY is the shortest segment of the triangle.

A scalene triangle cannot have a pair of congruent angles because all of its sides and angles are not equal.