At a school fair, you have a choice of spinning Spinner A or Spinner B. You win an MP3 player if the spinner lands on a section with a star in it. Which spinner should you choose if you want a better chance of winning?

A. Complete the table.

Question 1.
Theoretical probability is a way to describe how you found the chance of winning an MP3 player in the scenario above. Using the spinner example to help you, explain in your own words how to find the theoretical probability of an event.
Answer:
First, find a total number of outcomes for an event
Than find a number of favorable outcomes.
Probability of an event is ratio of the number of favorable outcomes divided by total number of outcomes.

Describe a situation that has a theoretical probability of \(\frac{1}{4}\).
Answer:

Question 2.
You roll a number cube one time. What is the probability that you roll a 3 or 4? Write your answer in simplest form.
P(rolling a 3 or 4) = 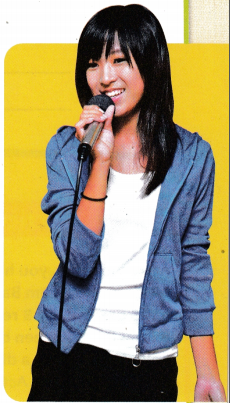 Six students are performing in a talent contest. You roll a number cube to determine the order of the performances.
STEP 1: You roll the number cube once. Complete the table of theoretical probabilities for the different outcomes.

STEP 2: Predict the number of times each number will be rolled out of 30 total rolls. 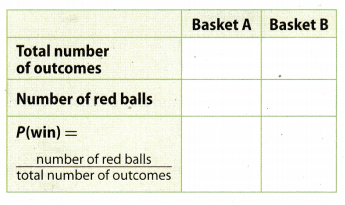 A spinner has 11 equal-sized sections marked 1 through 11. Find each probability. (Example 1)

Question 3.
You spin once and land on an odd number.

Question 4.
You spin once and land on an even number.

You roll a number cube once.

Find the probability of each event. Write each answer as a fraction in simplest form, as a decimal to the nearest hundredth, and as a percent to the nearest whole number.

Question 8.
You spin the spinner shown. The spinner lands on yellow.

Question 9.
You spin the spinner shown. The spinner lands on blue or green.

Question 11.
You pick one card at random from a standard deck of 52 playing cards. You pick a black card.
Answer:
P (picking a black card) =

Question 12.
There are 12 pieces of fruit in a bowl. Five are lemons and the rest are limes. You choose a piece of fruit without looking. The piece of fruit is a lime.
Answer:
P (choosing a lime) =

Question 13.
You choose a movie CD at random from a case containing 8 comedy CDs, 5 science fiction CDs, and 7 adventure CDs. The CD is not a comedy.
Answer:

Question 15.
Communicate Mathematical ideas The theoretical probability of a given event is \(\frac{9}{13}\). Explain what each number represents.
Answer:
Number 9 represent number of ways the event can occur and 13 represent total number if equally likely outcomes.

b. Critical Thinking If a student from one grade is more likely to be chosen than a student from the other, is the method unfair? Explain.
Answer:
There are more students from seventh grade than students from eighth grade, but how we chose at random this method is not unfair.

A jar contains 8 red marbles, 10 blue ones, and 2 yellow ones. One marble is chosen at random. The color is recorded in the table, and then it is returned to the jar. This is repeated 40 times.

Question 19.
Communicate Mathematical Ideas Use proportional reasoning to explain how you know that for each color, the theoretical and experimental probabilities are not the same.
Answer:
The theoretical probability is:

The experimental probability is:

In this exercise total number of possible outcomes and totaL number of trials is the same because we have 40 marbles and 40 trials.

Number of favorable outcomes are determined with number of each color, while number of times the event occur can be different from one experiment to other experiment.

In order for probabilities to be the same in this exercise, the number of favorable outcomes should be equal to the number of times the event occur, but it does not matter in the general case.